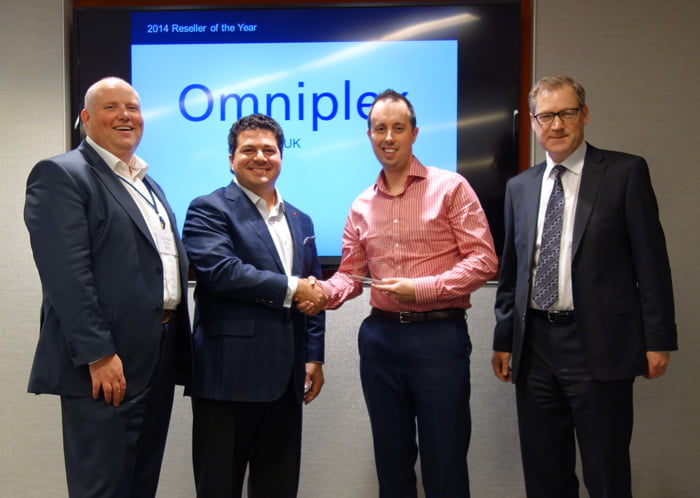 It was just announced that Omniplex has been awarded   Partner of the Year 2014 by Articulate! We are incredibly honored to achieve this award and are extremely proud of our entire Omniplex team!

Omniplex Sales Manager, Stephen Miller, and I were at the   Articulate Partner Summit  in New York City to accept the award.

Each year Articulate hosts a summit to bring together resellers from around the globe for two days of in-depth eLearning discussion and information sharing. With products used in over 48,000 organizations, there is always a lot to talk about. One of the highlights of the summit is an award given to the company that sells the most Articulate licenses worldwide. And this year, we’re thrilled to report the award is ours!

Omniplex was first announced as   Runner Up for Partner of the Year 2013, taking second place in a close race to our friends at MicroWay® from Australia. But through all the anticipation and tension, we felt 2014 would be different.

Maybe it was our team of ambitious over-achievers and expert Articulate sellers, trainers and designers, or perhaps it was Stephen’s crossed fingers and toes, but the news broke in our favor – Omniplex were the new champs, eking out MicroWay®, who took runner up.

This win validates all of our hard work and confirms our presence as an Articulate powerhouse. We can confidently say that we’ve helped thousands of businesses around the world by selling and supporting Articulate products. We’re overjoyed with the news and will be riding this high far into the New Year! Of course there’s plenty to celebrate, but we’re already looking ahead to defending our title in 2015.

Thanks so much to the amazing guys at Articulate and a great big THANKS to our incredible team here at Omniplex. We couldn’t have done it without you!